Rider senior a featured dancer in 'In the Heights' movie

Viewers of the new movie musical In the Heights will see one Rider Bronc dancing in every big number. Senior finance and accounting double major Thomas Miceli stars as a principal dancer in the film adaptation of the Tony-Award-winning show.

A hip-hop dancer by trade, Miceli performs a range of genres from jazz funk to a hip-hop style originating in New York called litefeet to salsa — a style he learned on the spot during his audition.

Directed by Jon M. Chu (Crazy Rich Asians) and written by Lin-Manuel Miranda (Hamilton) and Quiara Alegría Hudes, In the Heights follows Usnavi, a bodega owner, and his tight-knit community in New York City’s Washington Heights neighborhood as they experience success, joy, luck, love and heartbreak. Shot mostly in the actual neighborhood, Miceli says his favorite scene to shoot was the opening number, which features a street full of dancers and the main cast.

“We were in the center of Washington Heights and the people who actually lived there were opening their windows and looking out at us,” he says. “It’s such a community-based scene. It felt like you were really living the movie.”

The movie, which premiers in theaters and on HBO Max June 11, is a longtime coming for Miceli who auditioned in early 2019. He made the trek from Lawrenceville to New York City for two rounds of auditions and a number of rehearsals during his sophomore year, while pursuing his undergraduate degree full time. After attending a screening with the cast on June 10 in New York, Miceli, who comes from a close-knit family, will celebrate the release of the film surrounded by loved ones in a private theater his mom rented out.

A role in In the Heights is another moment on Miceli’s already lengthy dance resume, which began at just 6 years old. After trying out a karate class — it wasn’t a good fit for him — Miceli’s mom took him out for pizza. Next door a new dance studio was opening and Miceli asked his mom to go inside.

“I thought the teacher was pretty,” he says with a laugh, reminiscing about his start in the dance world. The only boy in his hip-hop class, Miceli soon became a member of the New Jersey (now Brooklyn) Nets Kids, performing during games until age 13, when he began choreographing for the team. At 10 years old, Miceli performed on MTV’s America’s Best Dance Crew during its sixth season, the first to allow children to compete. As a member of the ICONic Boyz, his group finished second overall and toured the U.S. during 2012. Miceli danced alongside Beyonce in her Let’s Move Your Body video released for former first lady Michelle Obama’s Let’s Move! campaign. 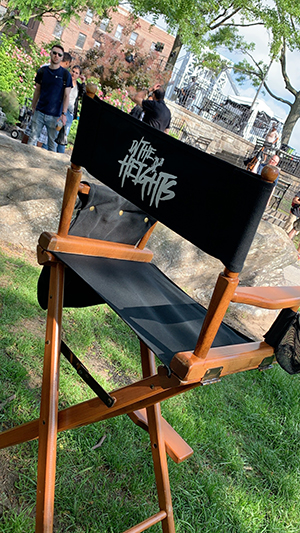 In addition to hip-hop, Miceli is trained in contemporary, jazz, tap and ballet. He teaches at three local studios near his home in Manalapan, N.J. He has also trained with some of the world’s most prominent choreographers, who have worked with stars such as Pink, Sia and Chris Brown.

“Contemporary and hip-hop are my two styles,” he says. I like contemporary because it has a mix of hip-hop in it, but it has a slower, emotional feel. Hip-hop is just really fun. It’s a way of speaking and letting out your feelings. I love to express myself through dance.”

After earning his Bachelor of Science in Business Administration this year, Miceli plans to enter the real estate industry with hopes to one day open his own dance studio or move to California to pursue dance professionally.

“I first want to make sure my family is OK money wise,” he says. “I was always taught to work hard. They always say, ‘What you put into something is what you’ll get out of it.’ My parents have always been hard-working people. Now I work so I can give my parents more.”