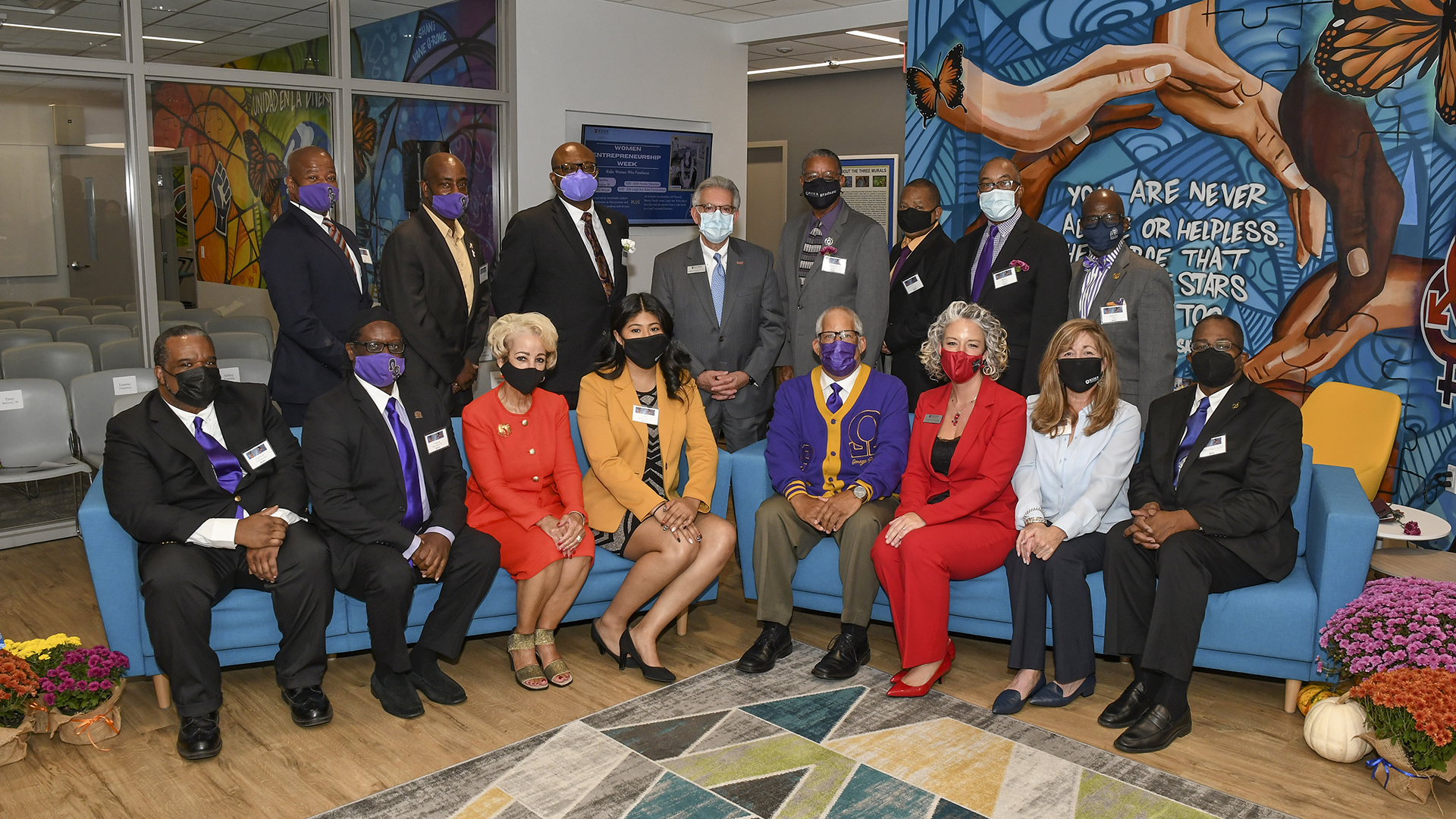 Rider University dedicated its new home for the Center for Diversity and Inclusion on Oct. 15, celebrating a cornerstone of the University’s efforts to cultivate a welcoming climate for members of the campus community across diverse identities and acknowledging nearly $112,000 in gifts from generous donors who supported the Center’s construction.

The ceremony acknowledged the strong backing the Center received from alumni, staff and friends of the University with more than 50 donors contributing. Those thanked and acknowledged at the event for their generosity included Pamela Pruitt, Ed.D., executive director of the Center for Diversity and Inclusion, for whom the Living Room is now named; Leanna Fenneberg, Ph.D., vice president for Student Affairs, for whom the Identity-Based Student Organizations Workroom is now named; and Investors Bank, which named the Executive Director’s Office.

In addition, the largest gathering room in the Center was named the Minority Alumni Coalition “MAC” Meeting Room. The Coalition was represented by Garry Keel ’78, who organized the group in honor of the late Lawson R. McElroy, assistant director of Admissions and Financial Aid at Rider from 1974-84.

More than 100 Rider students, staff, faculty and alumni participated in discussions that first envisioned the space and their suggestions were incorporated into the final design.

“Right from the beginning, this project was inclusive, seeking out different perspectives in order to create this welcoming space,” says Rider President Gregory G. Dell’Omo, Ph.D. “Our society needs to better recognize the value of listening to distinct voices. This project has certainly benefited from that and our campus community is strengthened by it.”

The Center has been open since August 2020 but the formal dedication was delayed until the campus fully reopened so that students and others could participate in the event in person.

In addition to supporting 23 multicultural clubs and student organizations, the Center works with faculty, staff, alumni and peer mentors to foster an understanding and appreciation of different cultures and identities in order to support student engagement, retention and persistence to graduation.

Among its powerful programs are the Multicultural Student Leadership Institute (MSLI), which has helped first-year and transfer students from diverse backgrounds successfully transition from home to college life.

“The Center will support students with marginalized identities by promoting their sense of belonging. Through open dialogue, the Center will cultivate a deeper understanding of issues of diversity, equity and inclusion for all students as a vital part of their Rider education," says Fenneberg. “It is our collective responsibility to promote inclusive excellence — across all of our identities and backgrounds."

The dedication of the Center coincides with the addition of Rider’s first vice president of diversity, equity and inclusion and its chief diversity officer, Barbara J. Lawrence.  Guided by University’s Inclusive Excellence Plan, Lawrence is charged with overseeing Rider’s goals around institutional inclusion, including improving the diversity of employees and enhancing support for underrepresented students, among others. She assumed her role at Rider in September and serves as a member of President Dell’Omo’s cabinet.

The prominent location of the Center, on the ground floor of the Bart Luedeke Center, underscores Rider’s commitment to fostering an inclusive living and learning community.

“I intend for the work of the Center to reach beyond these walls to encourage awareness of other cultures and ideas and to create a sense of belonging across campus so that all students feel valued and respected,” says Pruitt.

From the Center’s inception, Pruitt envisioned a collaborative project with ArtWorks Trenton to create signature visual elements that appropriately symbolize the values associated with the Center’s mission. Together, Trenton artists, Trenton high school students and Rider students designed graffiti murals that adorn the walls of the Center.

This year at Rider, 48% of first-year students reported as underrepresented (students of color and/or Hispanic). Approximately 41% of Rider’s entire student body is now made up of underrepresented students. This is in addition to the representation of other identities, including 27% first generation to college, 35% low-income, 12% with disabilities, a diverse representation of religious affiliations and a significant presence of students who identify as LGBTQIA+.

University Advancement continues to raise funds in support of the Center and its programming. More information about donor opportunities, including the chance to endow programs and name spaces, can be found at rider.edu/center-diversity-inclusion.