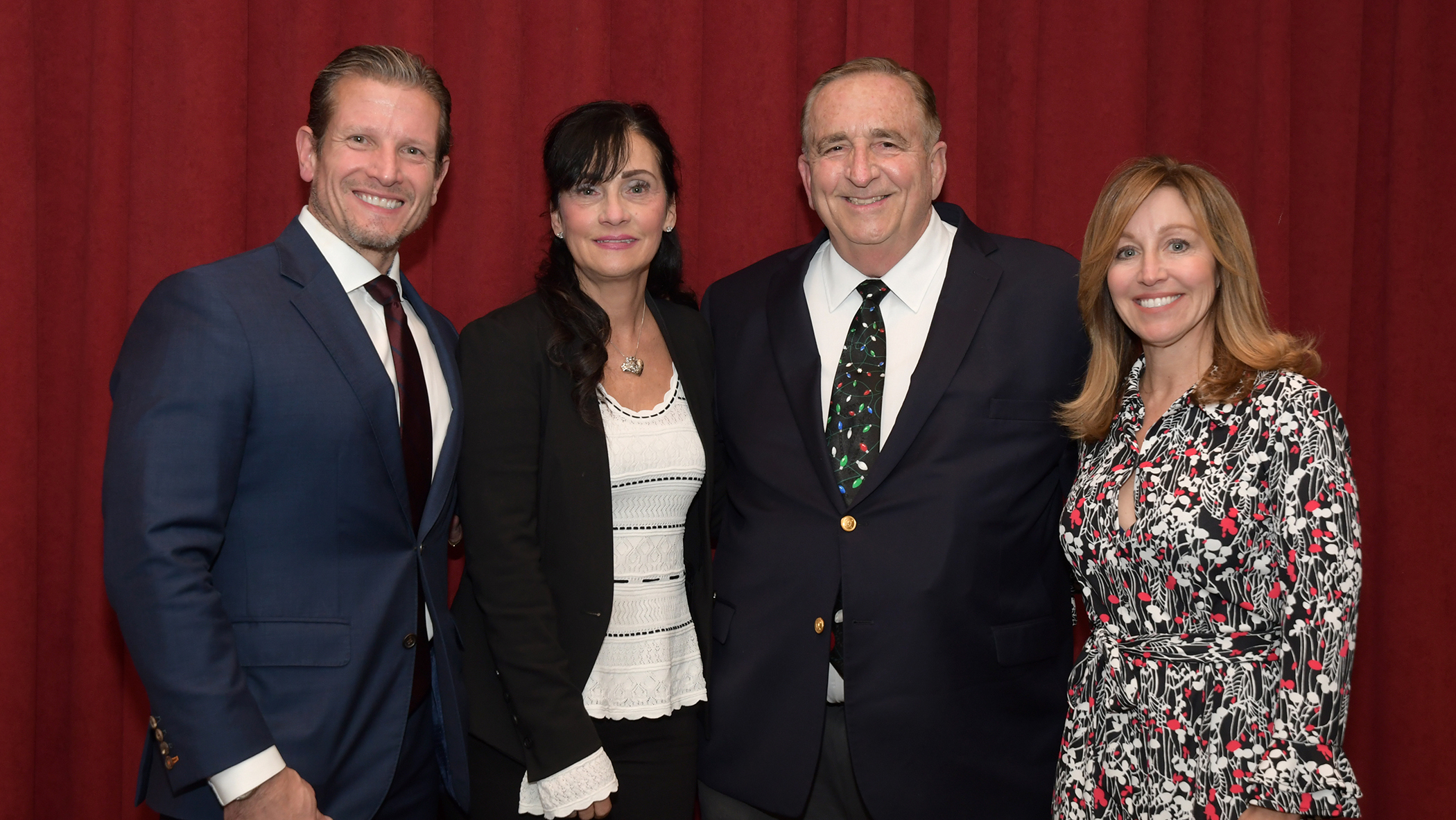 Undergraduate business students with limited financial means will benefit from two new endowed scholarships created by Board of Trustees Chair Rob ’87 and Janet Schimek through a $1 million gift to Rider University.

The scholarships honor two individuals that Rob Schimek credits with connecting him to Rider and launching his career: assistant professor Dr. Barry Ashmen ’69, ’70 and former adjunct professor Dennis F. Wasniewski. Wasniewski, a mentor to Schimek, was a leading partner in the Princeton office of what was then-called Deloitte Haskins & Sells. He died in 2001.

The Schimeks kept the naming of the scholarships a secret, so it was a much-surprised Ashmen and the equally astonished family of Dennis Wasniewski who learned of the Schimeks’ intent for the first time on Dec. 4 as family and friends gathered in Sweigart Hall to hear the announcement.

“It was Barry who gave me both the confidence and the support to apply to Rider,” recalls Schimek, a member of the University’s Board since 2014. “I think he knew that I appreciated him, but I felt I hadn’t done enough to make sure that he knows the important influence he had on my life, and that is why I chose to do this.”

Schimek was raised as the third of six children in a lower-income family. His father was a long-haul truck driver and his mother worked at a travel agency in Trenton, N.J. “I grew up pretty poor,” he says. “At one time, my family was on food stamps. But my parents worked hard and eventually saved enough to open their own video store in Lahaska, Pa.”

It was there that Schimek met Ashmen and his wife, Sally, who were regular customers of the video store. At the time, Schimek was finishing up his associate degree at Bucks County Community College and was undecided about what to do next. Ashmen, a marketing professor at Rider, encouraged him to transfer to the University and assisted him in filling out the paperwork to apply.

“I believe that, had I missed out on attending Rider, everything could have played out very differently in my life,” says Schimek. “I feel blessed that I had the opportunity to get an education and I would like to make sure that same opportunity is given to others.”

Schimek, the managing director and group chief operating officer of FWD Group, an Asia-based insurance company, began his career as a senior-year intern at what is now called Deloitte & Touche. After earning a Bachelor of Science in Commerce with a double major in business administration and accounting, Schimek was offered a permanent position at the firm and it was then that he met Dennis Wasniewski.

“Dennis was the first partner that I worked for when I joined Deloitte in 1987,” Schimek says. “He took me under his wing as a mentor and a tutor. He was a very energetic partner, which was very influential to me as a young staffer. I think it probably led me to be a better executive by following his lead.”

In addition to working together at the accounting firm, the two bonded through volunteer work. “In winter, during tax season, we would spend time together on weekends preparing income taxes for low-income residents,” says Schimek, who notes that the work helped to deepen their friendship. “It was then that I really got to know Dennis, and to appreciate him as a wonderful human being — someone who was a respected businessman and a great husband and father.”

Their bond also helped Schimek to reestablish his ties to Rider. Wasniewski, who at the time was teaching accounting classes at the college, would call upon Schimek to be his substitute teacher when he had a business trip and couldn’t instruct the class himself.

“I loved it and I did it for five years,” says Schimek, who assumed the classes after Wasniewski passed away. Although that meant he would sometimes be teaching two classes a semester, Schimek refused compensation; instead, he donated his teaching salary back to the University.

“I think that one of the most important things that anyone can have in life is an education,” says Schimek, whose grandfather Richard Alpaugh, brother Steven ’89, and daughter Samantha ’16 also attended Rider. His youngest daughter, Morgan, is currently a sophomore at the University.

“I am at a point in my life where I am able to reflect on what led to my good fortune,” says Schimek, “and that was my education at Rider. It is my hope that these scholarships help provide that same opportunity for others.”

In addition to these scholarships, the Schimeks have previously donated to The Campaign for Rider Athletics. That gift resulted in the fitness center in the Student Recreation Center being renamed the Schimek Family Fitness Center.

In recognition of his accomplishments, Schimek was inducted into the University’s Accounting Hall of Fame in 2012 and he received Rider’s Distinguished Alumnus Award in 2017.