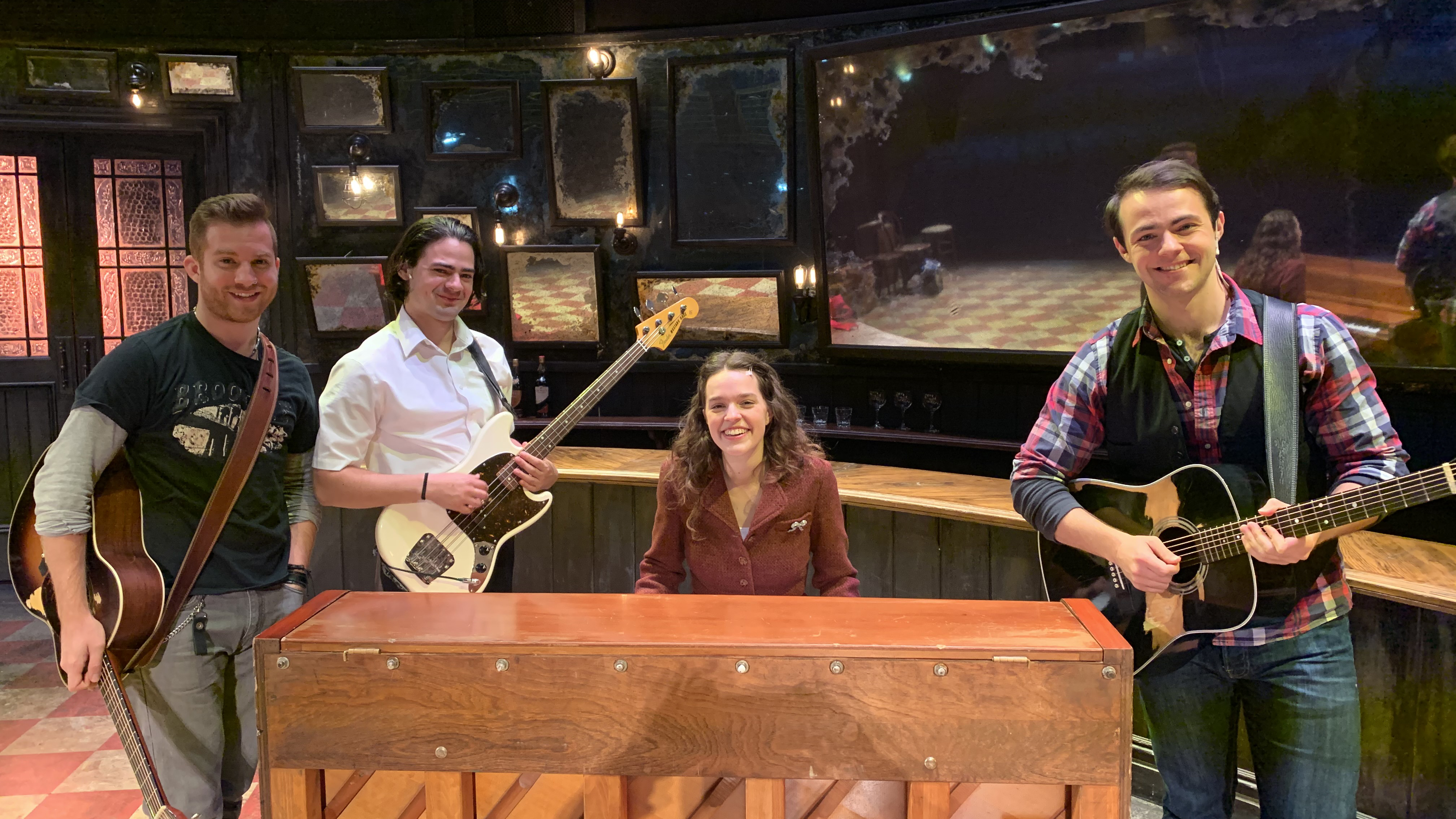 Last April, Jack Gerhard '19 gave Carlos Castillo '18 a ride to the Hamilton train station. They were both on their way to an open call for the national tour of the Tony award-winning musical Once. In New York City, the pair ran into Matthew Staley '17 who was also there auditioning. Castillo vividly remembers thinking, "Wouldn't be great if we all made the cut?"

This passing thought is now a reality. All three earned roles in the show along with another former Rider classmate, Mariah Lotz '18. Gerhard and Lotz star opposite of each other as the leads simply referred to as "Guy" and "Girl." Castillo and Staley play supporting characters Andrej and Eamon. Familiarity helps the four alumni as they hit the road for a nearly 40-city tour that started in October.

"We have all done at least one show together," Staley says. "I did my first show at Rider with Jack and Carlos. It almost feels like a Rider show because I'm surrounded by so many familiar faces."

Based on the 2007 Academy-Award winning film, Once is more than the average guy-meets-girl story. Set in present-day Ireland, Guy is a struggling street musician ready to give up on his dream when he meets Girl, a Czech immigrant, who reinvigorates his passion for music. Once truly embraces the show's score as it does not have an orchestra, rather the actors are the musicians.

"My favorite thing in the world is performing and playing music and to have that be one big thing tied together is incredible," says Gerhard, who plays guitar, violin, harmonica, piano and ukulele. "This has been my dream role for a long time."

Requiring such a specific skill set, Once tends to attract many of the same performers to each of its renditions. This is Castillo's third time as a cast member, but his first time playing Andrej.

"It’s a cool show to audition for," he says. "The audition in and of itself is a collaboration. I brought my guitar and mandolin, but they asked me back to play bass. The coolest thing was the director got out his guitar, and we jammed together for a little bit."

Lotz feels that the ability to play piano as Girl connects her more deeply to her character and the story.

"The show is challenging in all the right ways," she says. "I’ve always been strongly affected by the music in Once. It moves me. Once is a show about creators of music and the music serves as a window into the characters' emotional lives. The opportunity to combine music and theatrical performance is really exciting to me."

Once is one of the reasons Staley became a musical theatre major. "It broke all the boundaries of what I thought musical theater was," he says. "I said to myself, 'I could see myself doing this.' It made me feel like I had a place in the world of musical theater."

A mainly self-taught musician — who has a penchant for purchasing instruments at flea markets and teaching himself to play them — Staley has had an interest in music since he got his first guitar at 13. He was studying psychology at another university when he was asked by a friend to be in a show, which reconnected him to his love of music and performing. Shortly after, he knew Rider was the place for him and he convinced his parents that theater would pay off because he was ready for the work required to succeed.

All four agree that Rider fostered their talents and allowed them to grow as artists, praising their vocal instructors, acting teachers and the numerous abilities to cultivate their craft through student-run performances.

"You come in as a freshman and you're thrust into this community of people who are about the same stuff as you are," Gerhard says. "It was over my four years that I got the chance to really develop myself as a stronger performer with the help of the faculty, and through all the opportunities like student performances, playing in a few pit orchestras, studying acting, movement, singing. I loved Rider."