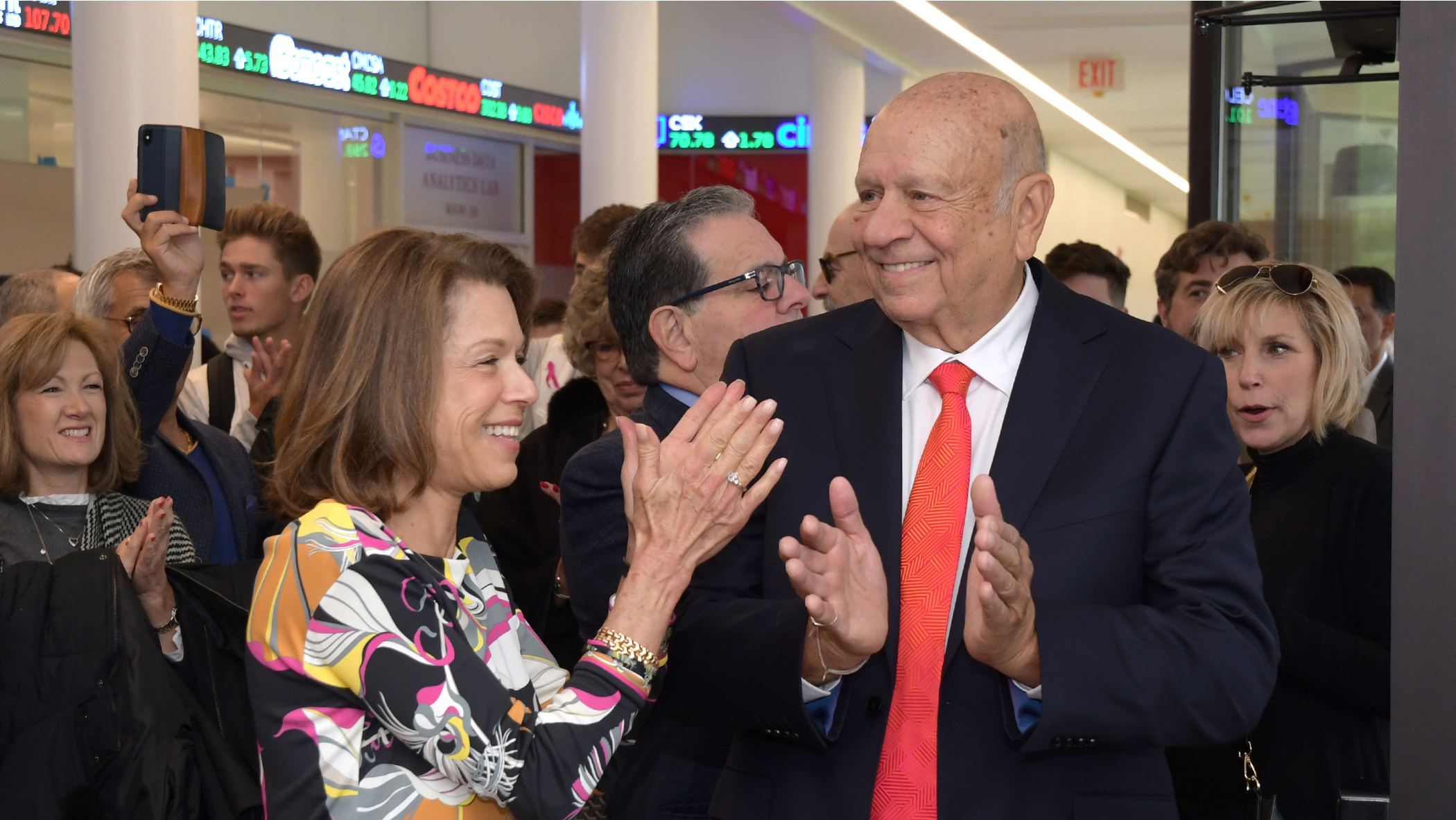 Rider celebrated the news Oct. 17 with a special ceremony to honor entrepreneur Norm Brodsky ’64 and his wife and business partner, Elaine, and to announce the couple’s $10 million gift to endow a scholarship for business students and to support future business school projects. Their gift is the largest donation ever received by the University.

Brodsky, an entrepreneur, lawyer and accountant who has launched eight successful businesses, has long been devoted to the success of Rider students. He is an adjunct professor at the University and has been instrumental in providing students with unique and important networking opportunities with successful business professionals.

Students, faculty and staff learned about the new name for the 154-year-old business college at a gathering on the University’s Campus Green. “This extraordinary gift exemplifies Norm and Elaine’s deep passion for Rider and its students,” said Rider University President Gregory G. Dell’Omo. “In recognizing this unprecedented level of support, we look to the future, and to what can be accomplished because of the generosity of the Brodskys. The impact of this gift will be nothing short of remarkable for our University.”

The Norm Brodsky College of Business is the first college at the University to be named for an alumnus.

After graduating from Rider with a Bachelor of Science in Commerce with a major in accounting, Brodsky went on to earn a law degree from Brooklyn Law School. In 1979, he started his first business, Perfect Courier, a Manhattan-based messenger service. Within a few years, it had offices around the country and landed on Inc. magazine’s annual list of the 500 fastest-growing private companies in America three years in a row.

In the years that followed, Brodsky went on to launch seven more successful businesses, including CitiStorage, the largest independent, privately owned archive business in the country. In 2007, he sold it, along with Perfect Courier and an affiliated document destruction company he co-founded, U.S. Document Security, to Allied Capital. His other ventures include a large-scale land purchase now known as Bushwick Inlet Park; Kobeyaki, a fast-casual Japanese restaurant; and two hotels in North Dakota called Black Gold Suites.

Brodsky credits his time at Rider with giving him a solid foundation upon which he built his career. “The most important factor in starting and running a business are the numbers,” he said. “You have to be able to understand the numbers, and as an accounting major I got that background early on.”

In addition to founding multiple businesses, Brodsky has also been a contributing writer at Inc. magazine ever since he launched his immensely popular Street Smarts column in 1995. The column was twice a finalist for a National Magazine Award and in 2008, it received a gold Azbee award from the American Society of Business Publication Editors.

He has regularly appeared on MSNBC, CNN and Bloomberg TV as a business commentator, and is the co-author of The Knack: How Street-Smart Entrepreneurs Learn to Handle Whatever Comes Up (Portfolio: 2008) with Inc. magazine’s former editor-at-large Bo Burlingham.

In addition to being Norm’s business partner, Elaine Brodsky is the chairperson of the North Brooklyn Chamber of Commerce. (The couples’ office is located in north Brooklyn.) She serves on several other boards as well, including the League Education and Treatment Center, also in Brooklyn. It is one of the nation’s oldest daycare facilities for mentally and physically challenged children and adults. A former elementary school teacher, she worked for several years as a conference coordinator for the New York State Office of Mental Health.

Norm Brodsky’s passion for business has made him a much sought-after mentor of business owners, mostly through an entrepreneur consulting program he co-founded called Birthing of Giants. His guidance of fledgling entrepreneurs has extended to Rider University students. In addition to co-teaching a Small Business Management class, he has opened doors for students in numerous ways.

This summer, Brodsky was instrumental in the development of Rider’s Innovation Intensive at the University of Oxford, a collaboration between the University and St. Stephen’s House, a permanent private hall of Oxford. The program was based on an entrepreneurial masterclass that Brodsky and his business partner at Birthing of Giants, Lewis Schiff, developed for founders and owners of fast-growth companies. The Innovation Intensive gave 25 Rider students and recent alumni the extraordinary opportunity to interact with and learn from 14 CEOs of U.S.-based companies.

“Norm has continually sought and developed ways to allow our students to get valuable exposure to the business world, giving them insight and the opportunity to ask questions about how business is practiced today,” said Eugene Kutcher, the College’s interim dean. “This knowledge is exactly the type of information to which all leaders of developing businesses wish they had access, so these opportunities give our students a leg up on competition once they graduate.”

Brodsky’s deep interest in nurturing and recognizing budding businesses has also extended to high school students. For the past two years, Brodsky and his wife have supported the Norm Brodsky Idea/Business Concept Competition, a nationwide high school business competition at the University that recognizes, promotes, and inspires young entrepreneurs. The competition’s grand prize is a four-year, full-tuition scholarship to Rider. Last year, Eric Voros of Medford, N.J., now a freshman at Rider, won for his idea of a belt that could be transformed into an emergency tourniquet.

In 2018 and again in October 2019, the Brodskys sponsored a student trip to the Inc. 5000 Conference. The conference is an invitation-only event with entrance fees in excess of $3,000 per person. The couple covered the entrance fee, airfare, hotel, meals, tuxedos, and formal dresses for a black-tie event at the conference so that six Rider students in 2018 and eight students in 2019 could attend, giving them exposure to the nation’s rising business leaders.

For his ongoing and steadfast support of students, Brodsky was awarded the Rider Distinguished Alumni award in 2013 and an Honorary Doctorate of Business in 2018.

“The naming of the Norm Brodsky College of Business recognizes Norm’s legacy of support,” says Karin Klim, vice president for University Advancement. “We are honored that this college will forever bear his name.”

Rider University has a long history of excellence in and commitment to business education. Both the business and accounting programs are accredited by the Association to Advance Collegiate Schools of Business (AACSB) International. Dual accreditation in business administration and accounting is held by only 2% of programs worldwide. The University was founded in 1865 to prepare returning Civil War soldiers for commercial professions. Over the years the institution — then called Trenton Business College — and its offerings grew. It became Rider University in 1994. Today it offers curricula in liberal arts, education, sciences and the arts as well as business, and currently enrolls close to 5,000 undergraduates and graduate students of which 1,365 are business students. The Norm Brodsky College of Business offers diversified programs of study that fulfill the needs of undergraduates who may pursue up to 16 majors and eight minors, or a combination of these academic programs. The College also offers five graduate programs and numerous certificate programs to prepare individuals for an increasingly complex job market.