Wayne ’72 and Jill ’72 Canastra's gift supports renovations to the pool, Alumni Gym and the Maurer Center 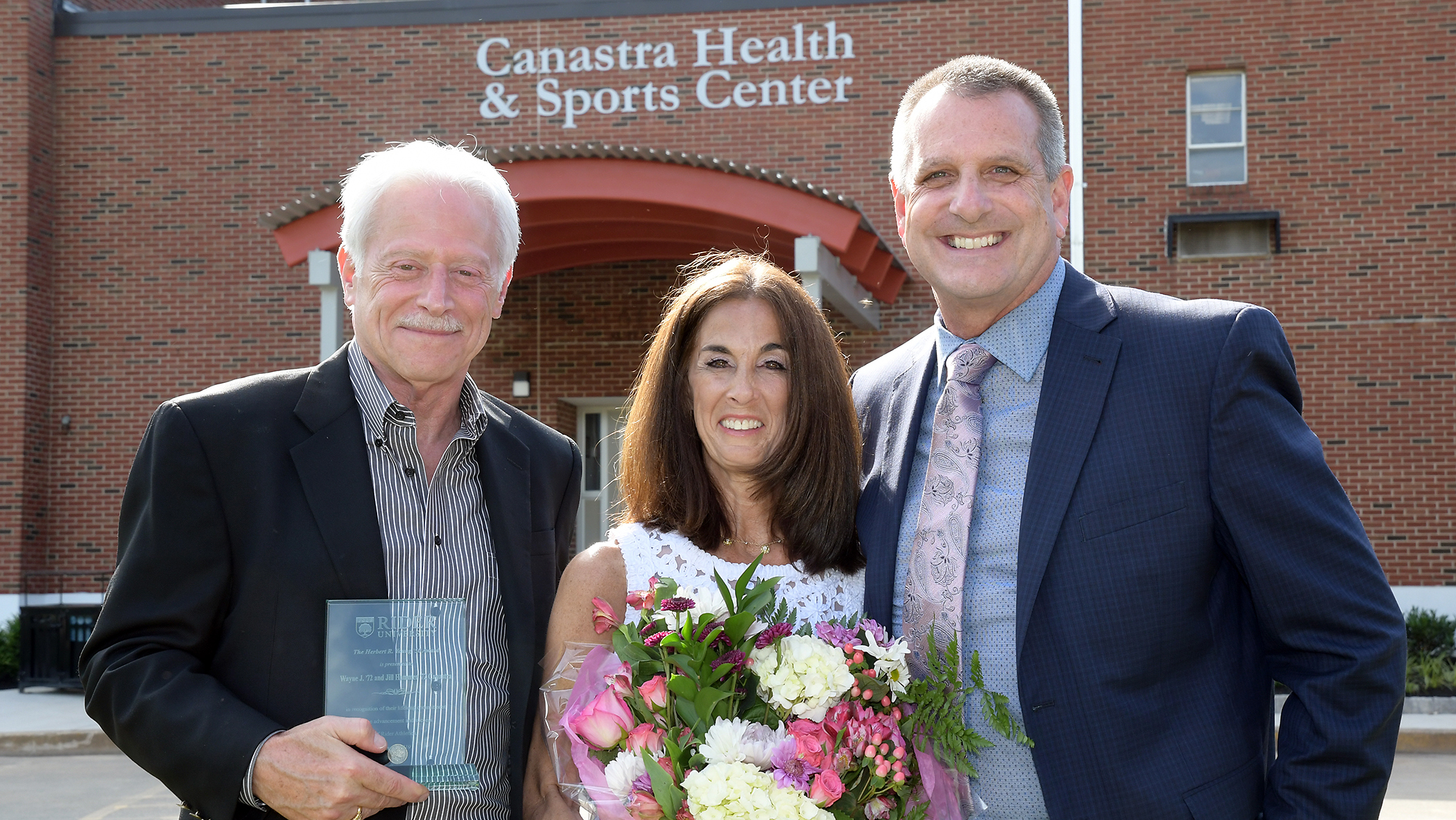 On June 8, Rider hosted a ceremony to formally announce a gift of more than $2 million from alumni Wayne and Jill Canastra and to celebrate the dedication of the Maurer Center as the Canastra Health and Sports Center. The South Orange, N.J., couple’s gift will contribute toward multiple projects, including the renovation of the University’s Alumni Gymnasium, the facade of the Canastra Health and Sports Center, and the Center’s Richard A. Coppola Pool.

Although Wayne ’72 and Jill ’72 were not student-athletes during their time at Rider, they have been consistently strong supporters of the Athletics program, as well as of other areas of the institution. To recognize their many contributions, during the ceremony the Canastras were honored with the University’s Herbert R. Young ’50 Award, given to individuals who have shown dedication to Rider Athletics over their lifetime.

“Jill and I have a rule that we live by, which is to give back,” Wayne says. “Our time at Rider was such a great experience. We were able to develop close friendships and meaningful ties with our professors. Our love for Rider has stayed with us, and we decided long ago that if there was a need and we could do it, we would fulfill that need. It is important to us.”

A portion of their gift is being applied to the University’s pool. Renovation is well underway, and the pool will be closed throughout the summer as improvements are made. The pool is home to the Broncs men’s and women’s swimming and diving teams, which have earned a total of 20 championships, including the current streak of eight consecutive Metro Atlantic Athletic Conference (MAAC) titles for the men.

The Canastras also designated part of their gift toward the renovation of Alumni Gymnasium. The University is currently raising funds to enhance the Gym with a particular emphasis on the overall fan experience, with new areas for ticketing and concessions, new premium seating and box seats, and a major expansion and renovation of the lobby, including increasing the number of restrooms, among other improvements.

The remainder of their gift will go towards renovating the outside of the Canastra Health and Sports Center. In addition to the University’s pool, the Canastra Health and Sports Center also houses the Anderson Family Strength and Conditioning Center, a wrestling room, student-athlete academic support center, health and exercise science programs, equipment room, an indoor golf center, locker rooms and offices for several University teams.

“Both the gym and the pool play such an important role in University life,“ says Jill, who earned a bachelor’s in elementary education from Rider and a master’s in counseling with a certificate in guidance from Seton Hall University. “Whether you are a student, a student-athlete, an alum or a member of the surrounding community, the improvements to both facilities will be enjoyed for years to come.”

Jill is a retired guidance counselor who formerly worked for the Millburn Township Board of Education. Wayne earned a bachelor’s in secondary education from Rider, but when he graduated, teaching jobs were in short supply in New Jersey, so he decided to try another career path — real estate. It led him to co-found Affiliated Management, Inc., a privately owned property management firm, in 1980. The company manages multi-family residential, professional and commercial real estate in northern New Jersey; Bucks County, Pa.; and Rockland County, N.Y. He is a prior member of the board of directors for New Jersey Special Olympics and a former board member of the Barnabas Health Care System.

Previously, the Canastras funded two scholarships at the University, the Morris Hammer Endowed Scholarship, named for Jill's father, and the Wayne and Jill Canastra Scholarship. They also contributed toward a campus beautification project and planted numerous trees near Centennial Lake and along other parts of campus, as well. In 2016, Rider named the recruiting lounge in the physical education building “The Canastra Family Recruiting Lounge” in honor of the couple. For their numerous civic and volunteer accomplishments, Jill received the Lifetime Achievement Award from Rider in 1997, and Wayne received the University’s Gordon E. Prichard Award for Volunteer Services in 2012.

“The renovation of our facilities is a critical step in moving our athletics programs forward,” said Rider University President Gregory G. Dell’Omo. "I thank Wayne and Jill for their support of this and so many other University projects and their steadfast investment in the future success of our teams."

Several multimillion-dollar gifts have bolstered Rider’s recent fundraising efforts, including one of the largest individual gifts ever received in University history. Last month, Rider dedicated Bierenbaum Fisher Hall in partnership with alumnus Barry Bierenbaum ’76 and his wife, Gail. Part of their gift benefits endowed scholarships and programming for the Gail Bierenbaum Women’s Leadership Council. The Council is dedicated to developing the next generation of Rider women leaders.